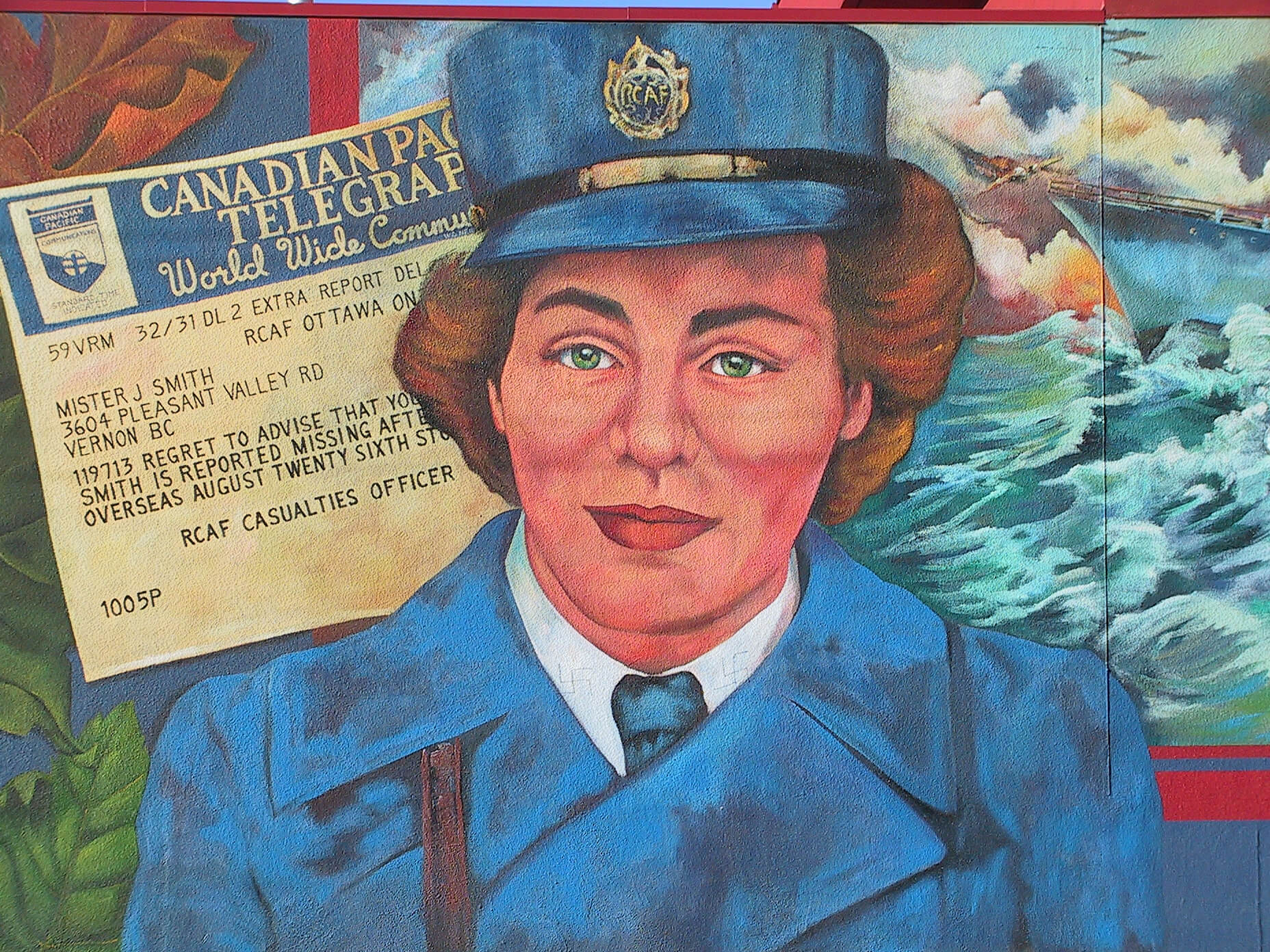 Vernon has a long and proud military history. This mural is a striking testament to Vernon’s dedication and involvement in the armed forces. In 1911, the City of Vernon leased land on Mission Hill to the Department of National Defense at no cost, for the establishment of a military camp. In 1913, the 1st militia summer camp was held, and by 1915 there were 3500 men, and by 1916 around 7000 men trained at Camp Vernon. This was twice the population of the town at the time! It is easy to imagine how the military presence dominated the city. The camp was again used in WWII as the first Fighting in Built Up Areas training facility in the world. Even today, cadets still use Camp Vernon. The federal government constructed an armory near camp Vernon for $20 000. There was also a prison on what is now W.L. Seaton Secondary There were only two of these prisons in BC, and the one in Vernon held Germany and Austrian Prisoners of War. At one time, the prison held up to as many as 400 internees.

World Wars (Wall facing Salvation Army) In this mural we can see the tent city of Camp Vernon on the far left side. Beside the tents are soldiers from the battle school creeping through trees as they train for DDay. Below Camp Vernon are lines from the war poem “For the Fallen.” The large soldier looks over the devastation of the Battle of Passchendaele, which was a major battle for Canada. In this battle, it was the Canadians who finally fought and defeated their opposition in one of the bloodiest, battles of WWI. The 5 month campaign claimed 140 000 combat deaths for only 8km of territory. This factors to be about 5cm per soldier lost. Just to the right is the Royal Air Force Captain William McCluskey. The nurse in this mural is the first aboriginal nurse to serve during WWI. The many coloured maple leaves represent the unity of the cultures and nationalities that make up Canada.

World Wars (Wall facing Dreamweaver) At the far corner, you can see RCAF wireless operator Joyce Nosh who stands and represents all women who fought and served in the World Wars. Vernon sailors work behind a newsboy near the center, while women keep the factories in production. Nurse G James turns away from Europe and in front of her stands flight Lt. Art Sovereign. While a BC Dragoon Tank operates in the Italian campaign. The BC Dragoons originally had their headquarters here in Vernon, with men from Enderby and Penticton training here for their groups. On the far right a soldier looks out over the battles. Note that he is wearing an American issue helmet, as Canadian ones were in short supply. The wide red band that runs the length of the mural represents the blood lost during all wars, while the thin line symbolizes the flat line of a heart rate monitor.